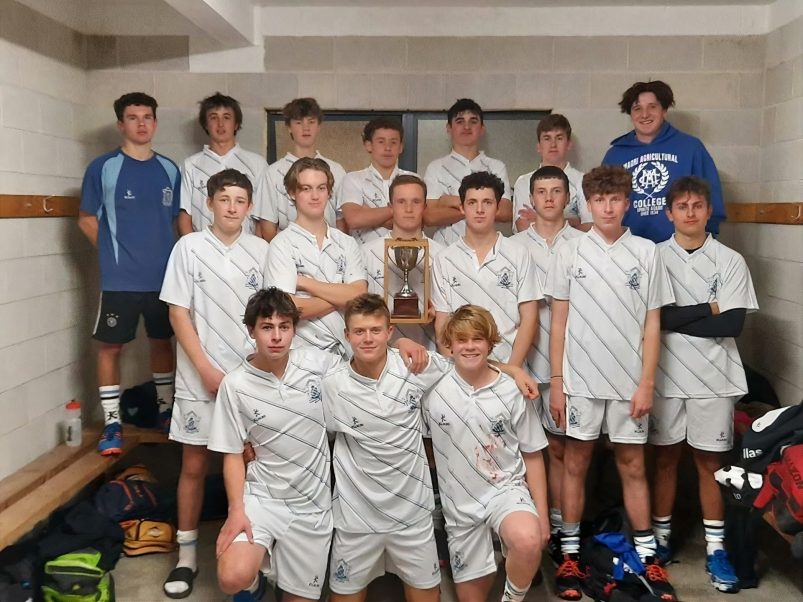 The team won the cup by defeating Palmerston North last year and has had to defend it when they have played at home this year.

NBHS hockey manager Kevin Martindale says retaining the cup is a big achievement as this is the first time a Hawke’s Bay school has won it.

“It’s like the Ranfurly Shield for secondary school’s hockey. We won it when we beat Palmerston North Boys’ High School in our Polson Banner exchange and we have had to defend it at home games.”

The team successfully defended the cup last year when they beat Whanganui Collegiate in the last round of the Founders Cup, a national competition for schools. With Covid-19 delaying the start of the hockey season, the first defence of the year was against Lindisfarne College last month. Wearing a new playing strip, NBHS proved too strong for Lindisfarne, winning 3-2 victory.

The confidence of the team was evident when they defeated Havelock North High 7-1 in “freezing” conditions at Park Island.

This sets them up for a rematch against Palmerston North Boys’ High and then, if they still retain the cup, a final match against Hastings Boys’ High School in September.

Mr Martindale said the success meant the team was “back in the topflight” in terms of national ranking.  Covid-19 and the subsequent lockdown meant some events scheduled for the season had been postponed.

That means the main event for the year will be the Super 8 Tournament in Tauranga at the end of August and beginning of September, but the Bartholomew Cup will not be up for contention then.

Mr Martindale, who has been involved with the team for 19 years as either coach or manager, said the intensity of the match against Lindisfarne had seen the boys work hard for the victory.

“Having the cup staring them in the face every time they came off for a break certainly gave them the motivation to win.”

He said that retaining the cup had raised the team’s profile in the school and this was reflected in the large crowd that attended the match against Lindisfarne.

Team captain Logan Gee said the fact that the boys had not known much about the Bartholomew Cup when they won it off Palmerston Boys’ High School last year had meant there had been no added pressure on them.

“Holding the cup is pretty cool because only one school can have it out of the whole of New Zealand. It also gives us something to play for as well when we have home games.”

He said the key to winning each game was about “making sure everyone’s on the same page and got their head in the game and motivated to play”.

Having lost eight year 13 players at the end of last year due to them leaving school, Logan said this year had been about rebuilding.

“They were was mainly our defence, so it was basically a brand-new defence including our goalie.”

For team member Lachlan Christian, the victory over Lindisfarne was particularly sweet.

“Lindisfarne relegated us to third division two seasons ago and we were able to beat them and keep the cup, which is good.”