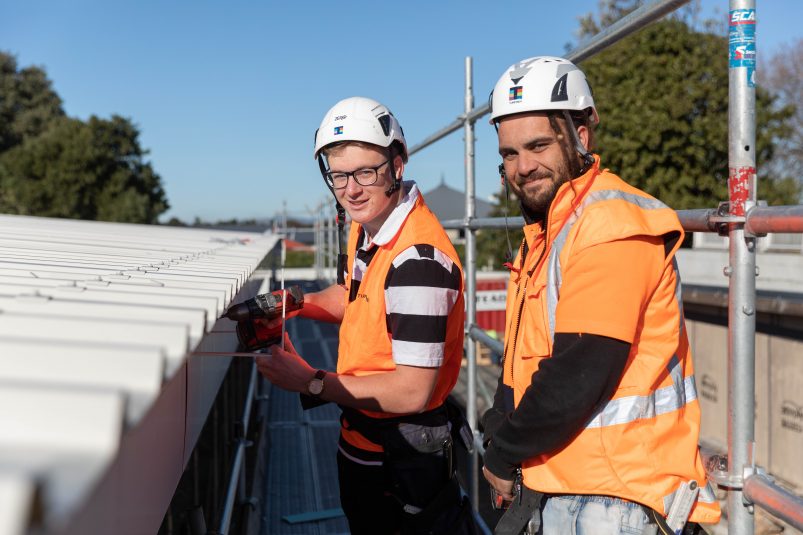 One week Duncan Hall was sitting in class at Napier Boys’ High School and the next he was on the school’s roof.

The 17-year-old was in year 12 when he decided to leave school and begin a five-year plumbing, gasfitting and drainlaying apprenticeship with Turfrey earlier this year.

Although he had always wanted to pick up a trade, it was not until Turfrey’s General Manager Richard Hutchinson spoke to a group of senior NBHS students just before the first Covid-19 lockdown, that he decided to go for it.

“School isn’t the thing for me, so I always wanted to leave but it’s just I knew I wanted a trade, but I didn’t know what I wanted to do.

“So when they came to me, I got the idea that this could be it. It sort of all fell into place; I suppose you could say.”

He asked his school for Hutchinson’s number, called him the following day, and the rest is now history. “I got a meeting after quarantine and I was on my way.”

Little did he expect his first day on the job to be at NBHS working on the new roof. “It was pretty cool,” he says.

Now, several months later, he does not regret his decision one bit.

“It’s actually been really good. From where I was before I started, I never would have thought that I could be doing what I am now, even if it’s just little jobs.”

However, despite not being a student at the school, he continues to live on-site with his mum, who is the school matron.

Turfrey is one of the larger employers of apprentices across the Plumbing, Gasfitting, Drainage and Roofing trades, with 31 apprentices working across their North Island operations.

With a “real shortage” of tradies in the country, Hutchinson says it is “really important” for the business, and a responsibility they hold, to pass on skills to ensure a strong future workforce.

As someone who left school at the age of 16 with no qualifications, to complete his apprenticeship, Hutchinson is passionate about bringing young people into the industry.

He regularly goes into schools and speaks to students interested in an apprenticeship. He either helps them through Turfrey’s or sometimes puts them in contact with their other sub-contractors.

“The main thing for us is that we encourage kids just to give it a try.” He says it is “such a difficult decision” for someone in their late teens to decide on a career they are going to have for the rest of their life.

“What I say to all of them is do it, stick at it for four or five years, get a trade and even if you don’t particularly like it once you’ve finished, it’s always something you can come back to if you need to. You’ll always get a job and that’s one of the things that I push on them.”