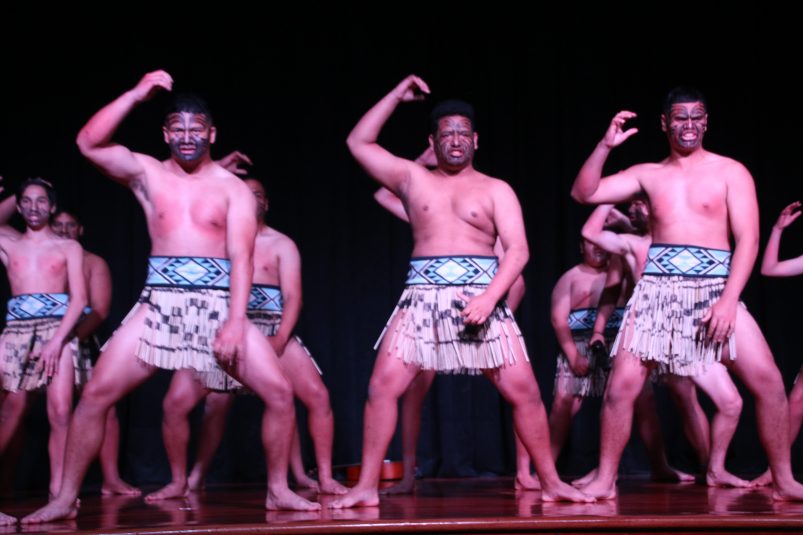 Taking to the stage for the first time this year gave one Napier Boys’ High School student not only the chance to perform but the ability to represent his culture and make his family proud.

Kharmen Merwood performed with the kapa haka group in this year’s inaugural NBHS Cultural Showcase Evening, held to allow cultural and music students to perform in a year where almost all competitions were cancelled due to Covid-19.

It was also the first opportunity for some of the junior students to perform.

The year 12 student has been a part of the group for four years now.

“Coming from a Māori background kapa haka, there’s not one year where I haven’t done kapa haka, so I’ve been doing it ever since kōhanga up until today.”

It is the “mana and wairua” and being able to make his whanau and friends proud is what compels him to perform.

Despite the evening almost having to be cancelled in September due to changing alert levels, nothing could stop the boys in Drama, Theatre Sports, Kapa Haka Pasifika, Music and Art from showcasing their talents last month.

Year 11 Pasifika student George Eneliko has been in the group for three years and says he was “lucky to have the chance to perform”.

“I missed going to the competitions, plus it is fun for all the boys.”

“It was really good to be able to get back on the stage and showcase something that means a lot to these boys.”

He said the pandemic had particularly affected the Māori and Pacific communities, so re-building “comradery and confidence with the boys” off stage was a particular focus.

The fact the boys were willing to give up 90 per cent of their lunchtimes since the start of term four to practice shows “how much these boys love it and how important the cultural aspects are to them here at this school”.

“To be able to bring that culture, showcase, and promote their culture is an important thing, obviously to me but also them.”
Emma Smith, science and extra-curricular drama teacher, said she was “really thrilled” with how it all turned out.

About 150 whanau and friends attended the evening.

“We are just really proud of all the performers,” she said.

“We lost all opportunity for my drama group to perform this year and when I talked to the other cultural groups they were in a similar state where things had been cancelled or there wasn’t as much happening this year,” Miss Smith said.

Her students performed a short half-hour one-act comedy play called ‘How to screw up your college interview’.

“I’m just really passionate about drama and acting and being on the stage so I want to take those opportunities when I have the chance.”