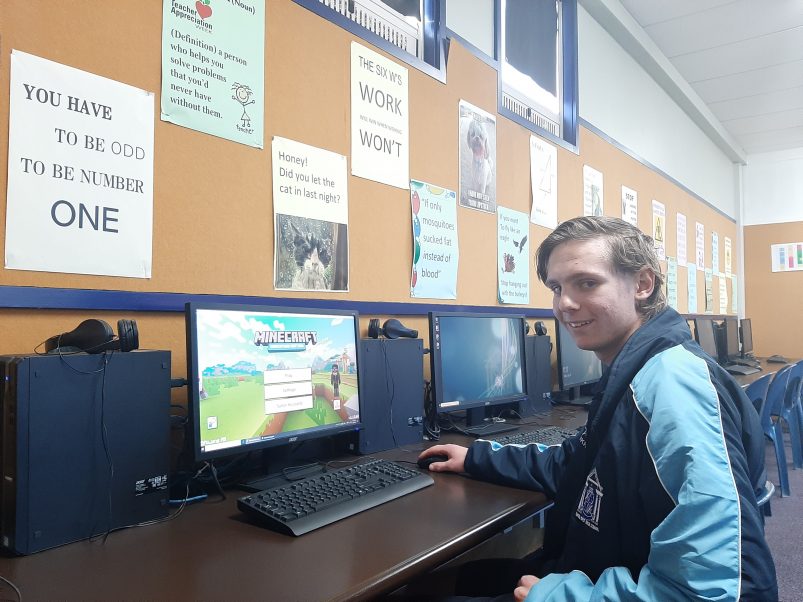 A Napier Boys’ High School student is inviting all gamers in the school to take part in an e-Sports competition to raise funds for the I am Hope Foundation run by Mike King, a former New Zealander of the Year and mental health advocate.

Year 12 student Camerin Boyle, who is part of the school’s Interact Club, came up with the idea after participating in a smaller competition a couple of years ago.

“The competition will be tournament-style games of Minecraft. We will have teams of two participating in a round-robin with semi-finals and finals following that.”

“It is really cool that the school has helped me set this up. Mr Smith was nice enough to give me $90 for canteen vouchers,” said Camerin.

The competition, which began on Monday, will run for three weeks. The entrance fee, all of which will go to charity, is $2.50 per player. An IT room has been set aside for the competition which will be run during lunchtime.

“I wanted to get it done before benchmark exams, so we are going to be playing two games every lunchtime. It’s really amazing the amount of help I have received from all the teachers.”

“I had to write a proposal for Mr Smith which outlined what I wanted to do. He looked at it, changed a few things and gave me some pointers.”

Camerin said he had been a member of the Interact Club for two years and had been keen to do something for the club.

“It gives me a goal to get people into it, improves my organising skills, and makes money for charity. It’s all for a good cause.”

He says that apart for raising money for I am Hope, the competition was also a chance for students to have some fun.

“I play a lot of PC games and It is always more fun when you’re playing with friends that you can banter with. That’s why I wanted to make it team orientated with partners to encourage more of that getting together and working towards a shared goal.”

CAPTION FOR PHOTO:
Napier Boys’ High School year 12 student Camerin Boyle has organised a Minecraft competition, with funds raised going to the I Am Hope Foundation.