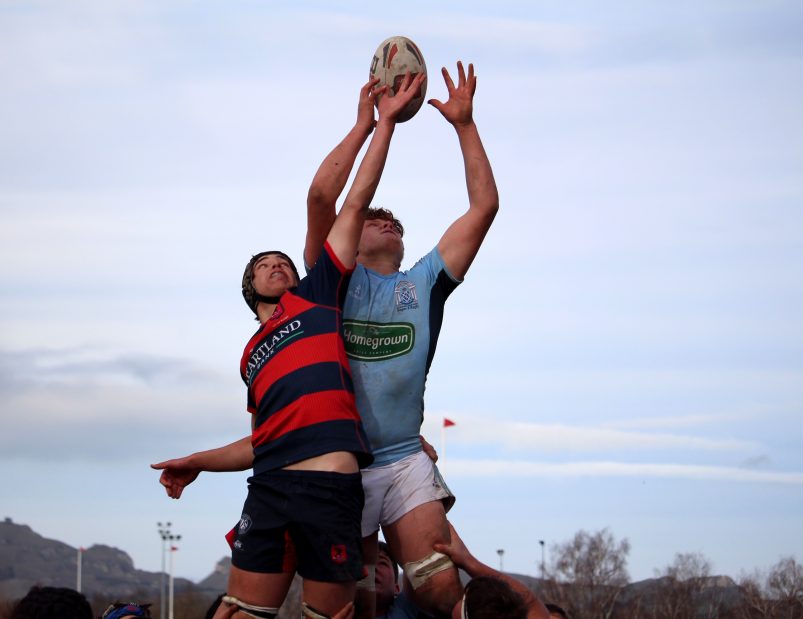 Growing young men and doing everything to prepare them for the real world is what motivates and rewards Napier Boy’s High School’s Director of Rugby Brendon Ratcliffe.

Mr Ratcliffe has been at Napier Boys’ for three years but has had a “lifetime” in rugby. It has taught him to put the game into perspective and to use it to teach his young charges about life. Victories like the recent 15-10 win over arch-rivals Hastings Boys’ High School were important, but he believes there is a bigger mission involved.

“The game against Hastings Boys’ is something those young men will remember for the rest of their lives and that’s special, but it is also about using the connection they have to the game that they love to teach them a bit about life.

“That’s what makes this role the most rewarding coaching role I’ve ever had in my life because it is about doing everything you can to prepare them for a real-world that they’re about to head into.”

Former All Blacks coach Sir Graeme Henry and All Black great Sir Brian Lochore’s mantra that “Better people make better All Blacks is something he subscribes to.

“School is an incredible place and a great supportive, and usually positive environment for them but in a lot of cases they’re about to head into a new area for the first time in their lives. Our aim is to teach them some really important life values through the game and through a commitment to the game.”

“If our players can continue to be good citizens here at school, in their community and in their homes, then they will go out onto the field and be better rugby players.”

Mr Ratcliffe’s rugby pedigree extends to having coached the Magpies for three years and a stint at the Northampton Saints in England with former All Blacks coach Wayne Smith. He is also a former Director of Player Development for the NZ Rugby Union between 1996 and 2002, with the role of setting up the first rugby academy in the country.

“There was no system or no programme in place, so we created that from scratch and that became the NZ Rugby Union Academy which was picked up by the franchises and picked up by provinces around the country.”

While he has seen the best of rugby, he says he has also experienced the worst of rugby. But he firmly believes that the life of a young player off the field is directly connected to how they perform on the field and cope with the pressure.

“We have a really simple philosophy here at Napier Boys’ – for some the classroom is not the most comfortable, or the place they enjoy being the most but if they are going to be the best they can be out here on the field then they have to learn to get comfortable being uncomfortable.”

“We believe in what we’re doing here. We believe that its really good for a well-rounded person, not just a one-dimensional player.”

An example of the success of this strategy is that two years ago the first team made it to the national finals. Of the thirteen members of that team in Year 13, eight went to university, four started fulltime building apprenticeships and one worked in the mines in Australia. It is a similar story for last year’s team whereof the eight Year 13s, five of them went to university, two went into fulltime apprenticeships and one of them is working and looking to join the police next year.

“That’s the thing we are most proud of and that’s where we know we are getting the recipe right. This is the important stuff.”

To be in the team, attendance rates at school need to be met, and the rugby department works directly with teachers and deans to ensure there is support in place for any boy who may be struggling.

“We will work alongside teachers and Deans to support the boys committing to their education as well as their sport.”

Napier Boys’ High School has produced 13 All Blacks since 1872, including current squad member Brad Weber and Gareth Evans, who made the team two years ago. Although the fortunes of the 1st XV are very important, promoting rugby at all levels is the main aim.

“It is about helping the players at all levels understand that there is a team here for you. A lot of people want to be in the 1st XV at school, but it is about the boys getting out there and playing with their mates.”

“Napier Boys’ provides approximately 30 percent of all the rugby teams in Hawke’s Bay-wide secondary school competitions so rugby is in good heart. “

The philosophy of the school has certainly struck a chord with Gilgal Malasia, a Number 8/ blindside flanker in his second year in the 1st XV. The 17-year-old, Year 12 hopes to pursue his rugby dreams but is also mindful of developing off the rugby field as well.

Captain and hooker Will Robinson says it was a privilege to lead a “good bunch of boys”.

In his final year at school, Will has his eyes set on the future as well.

“I’m applying for Otago Uni hoping to do agricultural innovation down there and go as far as I can with rugby and see where it goes from there.”

The team plays a home game against Tauranga Boys’ College this weekend and hopes to make it three from three in the Super Eight 1st XV Rugby competition. The Ranfurly Shield of secondary school rugby; the Moascar Cup, which they won last week will again be up for grabs.

Despite Covid-19 disruptions to sport, the competition has remained relatively unscathed. The team has their sights firmly set on making it to the grand final in September and winning the prestigious Polson Banner match against Palmerston North Boys’ High School in the process.