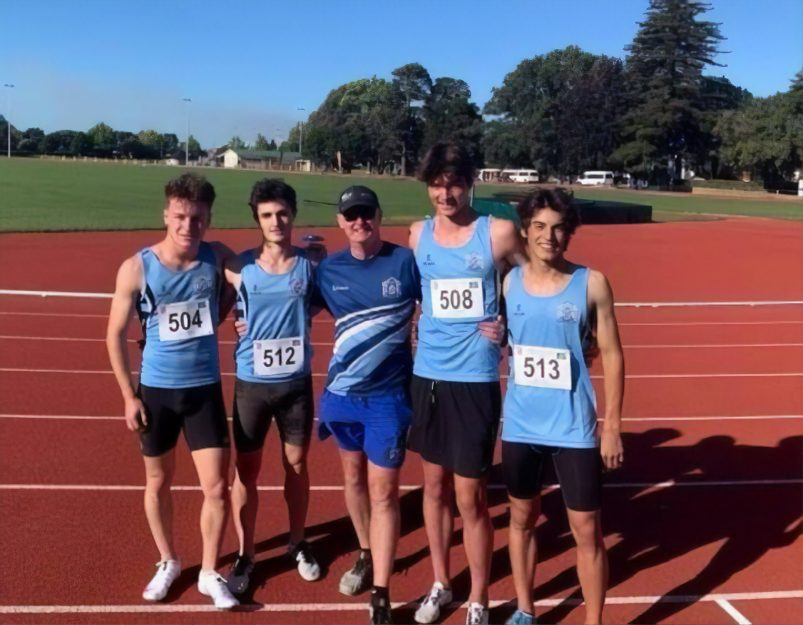 The past five years for Napier Boys’ High School’s athletics team has been marked by talent, comradery, grit, and a shared determination to succeed at the highest level possible.

Despite Covid-19 causing disruption to some scheduled competitions, and injuries hampering performance, the team had a successful year and one that the four departing year 13 boys can be proud of.

The New Zealand Secondary School Track, Field and Road Race Championships, held in Tauranga earlier this month, saw the 4x400m senior boys relay team get the silver medal, and the 4x100m junior boys get the bronze.

NBHS Deputy headmaster and athletics coach Bruce Smith said it was a “real high to finish on” for the year 13 boys’ final year of high school.

Mr Smith said the three year 13 runners had won a silver medal in the same event as a junior team three years ago and wanted to “repeat” their success this year.

In total, NBHS had 15 boys across all year levels attend the three-day event.

A stand-out of the event was Ryan Shotter, who despite having a hamstring pull and a taped-up leg, made it to the 100m semi-finals and helped secure the bronze for the junior team in the relay finals.

“He did his best but running on half a leg doesn’t help. He would have done really well if he wasn’t injured,” Mr Smith said. “So he made the semi-finals on a bung leg and then just true grit to run the 4x100m final for us.”

The other members of the team were Logan Woods, Liam Kilby, and Lexx Musson-Body.

In the individual races, Kairon made the 400m final, Archie and Raymond made the 400m semi-finals, and Ollie ran in the 1500m final.

Mr Smith said it is an achievement to run in the finals, particularly in the sprints where it means they are among the top eight in the country.

Hanno Nel competed in the Senior Boys’ events as a year 11, pacing fourth in the Hammer Throw and sixth in the shotput.

Mr Smith said it was a “great result” from a 16-year-old throwing against 18-year-olds.

Captain, Oliver Marshall said overall it was a “pretty good” performance by all the boys, and the medals were encouraging after all the hard work they have put in.

He already has several national medals to his name but says this latest one means the most to him given it is his last with NBHS.

Oliver says he has learned a lot over his time in the team. “I just want to thank the effort from the coaches and our parents and our teammates because that’s what pushed us to do better,” he said.

Mr Smith says it has been an “amazing” five years with the senior boys who have grown so much and succeeded at the highest level.

The focus next year will be on “rebuilding” the team with so many senior boys leaving. But their determination to succeed, and motivation to train six times a week has rubbed off on the juniors who are determined to win and carry on the Napier Boys’ legacy.