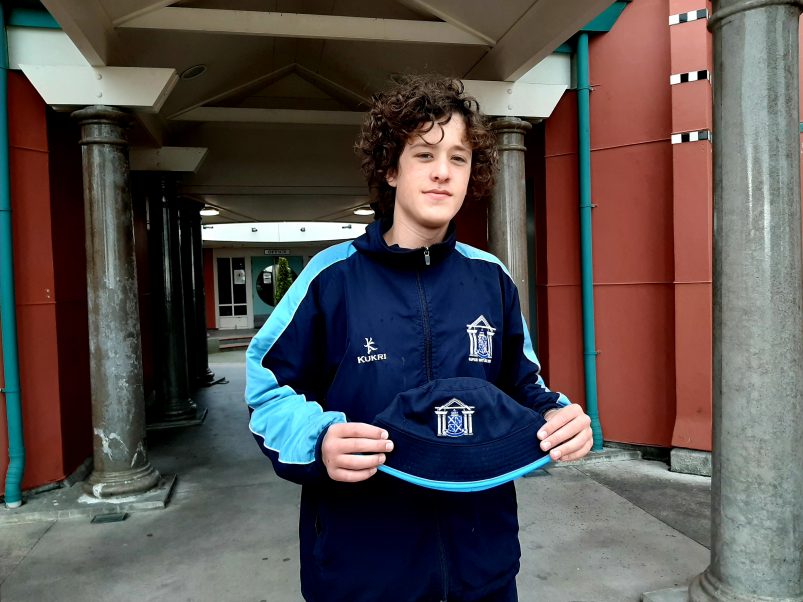 The Napier Boys’ High School uniform has a stylish addition to it, thanks to the efforts of a Year 10 student.

The bucket hat is now an official part of the school uniform and is already proving to be extremely popular with the boys.

Fifteen-year-old hostel boy Connor Kasper came up with the idea after older members of his family suffered from cancer of the ears as a result of exposure to the sun. Thankfully both family members have fully recovered, but the experience made Connor think about his own situation.

“I did not want to get that, so I thought it would be pretty cool if I made a hat. The hat will hopefully stop people from getting cancer in their ears.”

He says he has always been sun smart so it was a natural process for him to design the hat.

Connor had to work hard to achieve his goal, starting with a letter to the Headmaster Matt Bertram outlining his proposal and explaining why the bucket hat should become a uniform option.

To further illustrate his point, he made a prototype to accompany his proposal. This meant sewing it himself, despite never having sewed before.

“I just put the needle in and tried my best. It was just a normal blue bucket hat, and I cut the school emblem off one of our caps and sewed it on the bucket hat.”

With the product in hand, the next step was writing his proposal and taking it to Mr Bertram.

“It was a little bit nerve-wracking going to Mr Bertram, but he was very considerate and happy with the proposal.”

Connor’s proposal was taken to the Board of Trustees who approved this addition to the school uniform. Connor says he feels very good when he sees boys wearing it.

“He worked very hard for a good cause and he can be proud of his achievement,” said the headmaster.

Asked if he had any further fashion suggestions for the school uniform, Connor says he does not and is simply happy to see his idea being used.