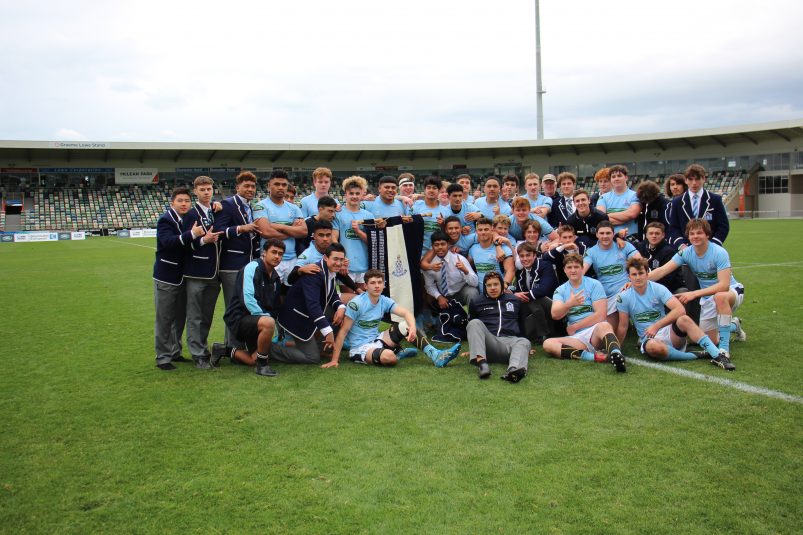 The loss of the Moascar Cup motivated Napier Boys’ High School’s 1st XV Rugby side to record its highest ever score in the Polson Banner exchange last week.

The Sky Blues won 50-21 against Palmerston North Boys’ High School in the 116th edition of the annual battle for one of the oldest secondary school rugby trophies in New Zealand.

Despite Covid-19 Level 2 restrictions meaning spectators were unable to fill McLean Park, the match was broadcast live on SKY and viewed by many around the country.

NBHS Director of Rugby Brendon Ratcliffe said it was the “most complete performance” the team has put together in the three years he has been involved.

“I knew the team could do that. It was just magnificent to see them come together like they did and put on such a display, he said.

“I just thought that it was a really strong and brutal performance upfront by our forwards against a much talked about and very big Palmerston North pack and that was complemented by some outstanding attacking play in the back.” 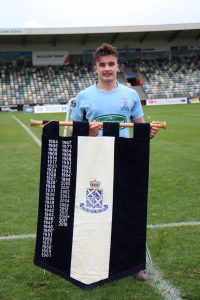 He said there was some “fuel there” after the loss of the Moascar Cup to Rotorua Boys’ High School the week before.

That, added with the year-long wait to bring the Banner back home after having it for three years.

“Sometimes your tough losses can be your greatest lessons and your biggest learnings and obviously you take everything you can out of those and work as hard as you can so that you don’t experience that again.

“I think a lot of the performance came down to their mindset and the responsibility that they took in getting their preparation right and treating the game with the respect that it deserves.

“We let ourselves down in the first half the week before and we really had a good hard look at ourselves, coaching, management and play and we all really stepped up. “

The 2nd XV side also had a strong performance in the Polson exchange, keeping their unbeaten status in this year’s Super 8 Rugby Competition.

With the addition of numerous other sports over the years, the exchange also provides the opportunity for high-level competition for some of the smaller sports like Clay Target, added this year, and Golf.

NBHS Sports and Cultural Coordinator Kirsty McCallum said compared to previous years, this year was a success in terms of the number of games they won across seven codes.

“4-4 meant a draw for the entire exchange but with the reduced number of teams this year due to Covid-19 level 2 restrictions, there were many teams who didn’t get the chance to represent NBHS in the exchange,” she said.

Since 2019 a large amount of organisation has gone into this exchange. With Covid-19, Ms McCallum said there were significant changes to make to ensure all games were played in the right setting.

“But then to see all the boys playing with so much passion and their excitement in general around the exchange is extremely rewarding.

“Our boys and coaching staff have been incredibly resilient and dedicated, their entire sporting year has changed dramatically and being able to deal with these changes has made them appreciate the games they do have. They have continued to train hard week in week out, and prepare the best they could for every game, even in uncertain times.”