Cultural and music students at Napier Boys’ High School will have a rare opportunity this month to take to the stage in a year severely disrupted by Covid-19.

The Cultural Showcase Evening due to be held on October 20 was the brainchild of science and extra-curricular drama teacher Emma Smith who wanted to create an opportunity for her students to showcase their “incredible skills and talents.”

“We have lost all opportunity for my drama group to perform this year and when I talked to the other cultural groups they were in a similar state where things had been cancelled or there wasn’t as much happening this year,” Miss Smith said.

“So we just thought it would be a nice idea to give the students a chance to perform but also a chance for their family to see them perform.”

However, Covid-19 almost prevented the showcase from taking place early last month when the country, excluding Auckland, moved to Alert Level 2 in August and September.

“We just said to the boys that we were going to do what we could to make this happen and allow them to do what they enjoy doing which is getting up on stage and performing.”

Also taking to the stage will be Theatre Sports, Kapa Haka, Pasifika, and Music. There will also be an art exhibition featuring students’ pieces. 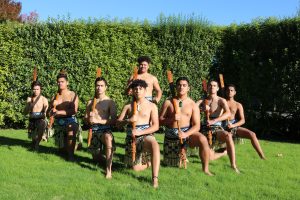 Napier Boys’ High School is holding a Cultural Showcase Evening on October 20 in light of a majority of cultural events being cancelled this year.

While anyone is welcome to attend the showcase, there will be a gold coin donation at the door.

Miss Smith’s drama students will be performing a short half-hour one-act comedy play called ‘How to screw up your college interview’.

Nine of the 11 drama students will be performing, as well as one girl from Napier Girls’ High School.

The play was one she originally had in mind for one of this year’s now-cancelled competitions. “It’s nice to be able to use it.”

Like other groups, the drama students have been rehearsing for at least two hours, once a week for the past two terms in preparation for the showcase.

“It takes quite a few weeks to get a performance together with rehearsals, they have to learn their lines, then their blocking which is how they move on the stage, facial expressions, and voice modulation.”

While it is a great opportunity for families to see their sons on stage, Miss Smith says it is “nice for all the different groups to be able to see what each other does”.

The groups go away to the Super 8 competition together but normally miss out on seeing each other perform.

“It will be quite nice on this evening for them to be able to see what each other does which is really good for their development and skills as a performer,” she said.