Napier Boys High School was awash with colours and costumes at this year’s annual Athletics Day on Friday, 28 February 2020. 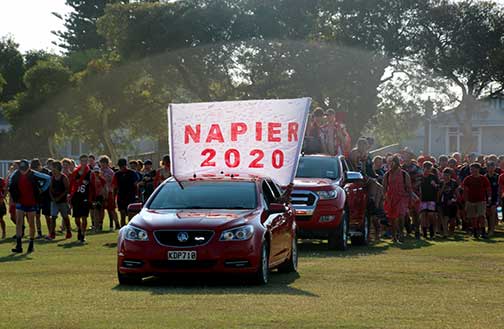 Not only was the competition on the field intense, but so too was the rivalry between houses.

All four houses made their unique entrances to the field hoping not to be outdone, from police escort (Napier House), tractor (Hawke House), Ambulance (Clyde House) and bikes (Scinde House).

Deputy Headmaster Bruce Smith said: “It’s really important as this is the day the little guys start to feel part of the place because they’re getting cheered on”.

Hostel mums also came to cheer on the boys.

Mr Smith said it was also about service. The day, which contributes towards house points, has been more than a week in planning for the prefects. They were at school setting up by 6 am and would be the last to leave after packing down the gear.

Jake Christian-Goss, a Hawke House prefect, said the highlight of the day for him is how “all the boys come together to support one another”.

“No one seems to single out anyone on days like today and everyone gets behind everyone else. Even if you’ve got mates in other houses, you still support them and at the start of the day the rivalry begins, and it makes it so much easier to get into.”

While fun and festivities were had, it did not detract away from the focus of the day – the sporting events. Everyone takes part in three to five events each and the best athletes are cheered on to set new school records.

Mr Smith, who also coaches track and field, said he chooses the top performers to go and compete at the East Coast North Island Champs.

The school already has some of the top sprinters in the country, he says. Four boys have been in the New Zealand Sprint Squad, while one other is in the NZ cross country team. They hope to match, if not beat the performance by NBHS at the National Athletics last December.

Year 12 Joshua Adegoke heads off to the Australian Track and Field Champs in March for 100m and 200m track events. In the senior boys’ 100m race at nationals, he missed a medal by .01, and came third as a year 11 in the 200m sprint finals– something which is “unheard of”, Mr Smith says.

Joshua hopes to make the final or get top five in March but also has a goal of winning the senior 100m and 200m sprints. “It would be huge to beat the Year 13s.”

“It’s good because it brings everyone into the sport, and everyone gets a look into what you’re doing.”